Thank you! I've been flooded with requests for my ethnic estimates, I'm going to process all of your requests that I've received by the end of 17.09.2021. After that I'm taking a few days break.

I've gathered reference samples from 185 countries of the world and created a DNA test which can tell you which of these countries you come from. Right now is the accuracy testing phase, therefore everyone who is interested can send me their raw DNA data file to - yourrootsdna@gmail.com - and get a free ethnicity estimate (with a percentage breakdown by country) within 3 days from receiving the file. I appreciate all feedbacks, which can help me improve the test's accuracy. I follow the rules of General Data Protection Regulation (GDPR) when dealing with customer data.

These are the countries that aren't included yet due to the lack of reference samples (if you are from one of these countries, of course you will not score it, but I still invite you to try the test):

These are the ten most common Y-DNA lineages among Ashkenazi Jews, and their % frequency: 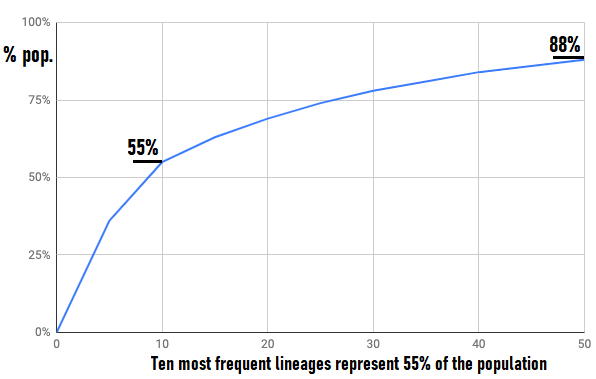 Do Central Germans exist in a genetic sense?

The map attached above shows the ethnicities of North-Central Europe during the 9th century AD. As can be seen a large part of modern Germany was at that time inhabited by Slavic-speaking peoples, who were usually called Wends by their German and Danish neighbours. The area which was already at that time German-speaking is known as Old Germany (Altdeutschland).

What distinguishes Altdeutschland from the Ostdeutschland (East Germany) is that East Germans usually harbor high levels of Slavic or Baltic (in case of East Prussia) ancestry. Slavic-speaking populations living between the Elbe and the Vistula rivers, mixed with - and partially were assimilated by - German settlers during the course of the Late Medieval Ostsiedlung: 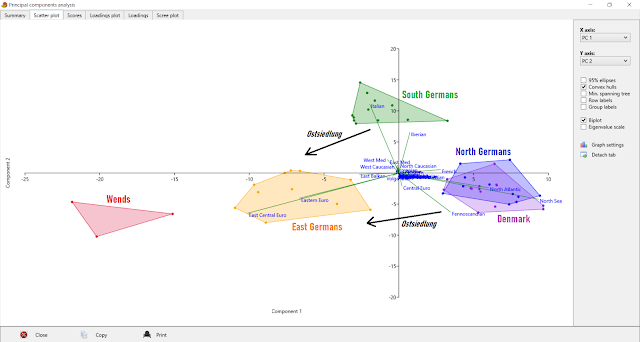 If you are interested in learning more about the Ostsiedlung, it may be a good idea to first read Helmold's "Slavic Chronicle".

For example these three chapters: 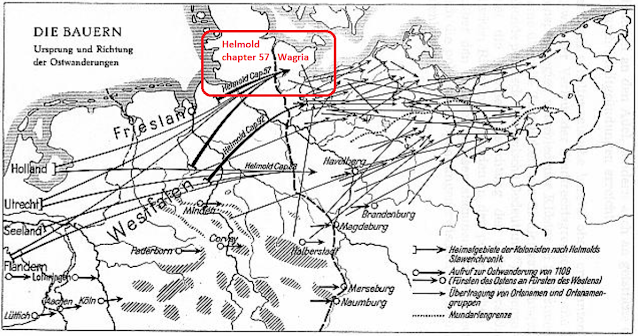 "(...) Count Adolf started building the castle of Segeberg and fortified it. Because the land was ravaged, he sent messengers to many regions, namely to Flanders, Holland, Utrecht, Westphalia and Frisia, with a message that if they needed more land they were free to come with their families, and they would be given a lot of good fertile land, full of fish and game, rich in vast pastures. He also told Holsatians and Sturmarians: 'Aren't you the ones who conquered Slavic land and obtained it through deaths of your brothers and relatives? So why should you settle as the last ones? Be first, start migrating to this desired land, settle it and benefit from its resources' (...). After that call, huge crowds of people from various nations started coming, together with their families and property, to the land of the Wagrians ruled by Adolf, who promised to give them land. Holsatians were given safe areas to the west of Segeberg, near the Trave river, including the Zuentineveld [modern Bornhöved] fields as well as everything between the river Schwale up to Agrimesov [modern Grimmeisberg] and up to Lake Plön. The region of Dargun [modern Warder and Ahrensbök/Stoob] was settled by Westphalians. The region of Utyn [Eutin] was settled by Hollanders. The region of Süsel [south-east of Eutin] was settled by Frisians. The region of Plön still remained depopulated for the time being. Regions of Starogard [Oldenburg] and Lutjenburg as well as other areas along the sea coast were left for farming to the Slavs, who now had to pay rent to Count Adolf (...)". 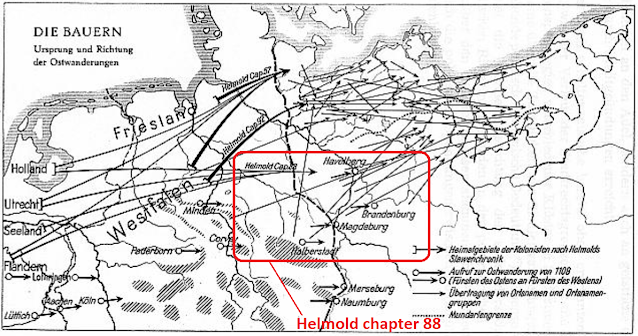 "At that time Slavic lands were ruled by Margrave Albrecht, also known as the Bear, who - thanks to God's grace - managed to conquer large Slavic territories. He captured entire land of Stodoranians, Brezans and many other tribes living at the Elbe and Havel rivers. And he was crushing those of them who were trying to rebel against his rule. When decimated Slavs started to slowly disappear, Albrecht sent messangers to Utrecht and to lands along the Rhine river and also to those who lived along the ocean's coast and suffered a lot from violent storms of the sea - namely Hollanders, Zealanders and Flemish people - and he brought many settlers from among them, and he settled them within Slavic towns and villages. Thanks to that colonization by foreigners, the Bishopric of Brandenburg and Havelberg increased its strength, because the number of churches and tax income increased. But also southern banks of the Elbe were at that time colonized by Dutch newcomers, they settled lands near Salzwedel and Balsemerland [around Stendal and Halberstadt], and Marscinerland [between Arneburg and Werben], with many towns and villages, extending as far as the Bohemian Forest. (...)" 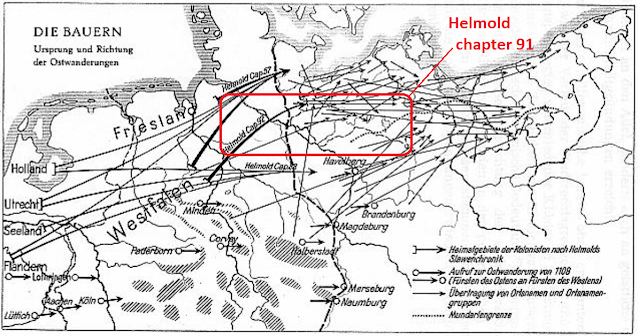 "(...) Heinrich, Count of Ratzeburg in the land of Polabian Slavs, brought masses of Westphalian settlers, in order for them to settle in the land of the Slavs. And he divided the land between them. And they built churches, and they started paying taxes from their farming income for the Glory of God. And God's deed started to spread throughout the land of the Slavs under Heinrich's reign, and was completed during the reign of his son, Bernard. On the other hand, Holsatians who settled in Wagria after expulsion of local Slavs, were very zealous when it comes to building new churches, and were very hospitable, but they avoided paying taxes. (...)"
***
But what about the Central German cluster? Does it even exist? It seems that the answer is no. People with recently mixed ancestry from northern, southern and eastern regions of Germany may represent such "Central Germans", but if we only include people with all ancestors from the same region - I'm pretty sure that such people will plot within one of the 3 main German clusters I identified above.

This map shows which regions are parts of which of the 3 clusters from the PCA above: 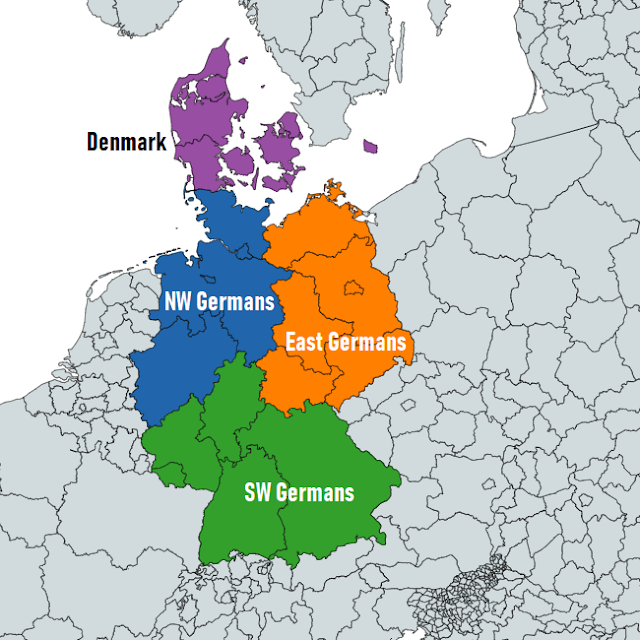 As for the Central French cluster - it does exist (see the PCA from my post about the Pyrenees).

The Pyrenees are not a genetic border 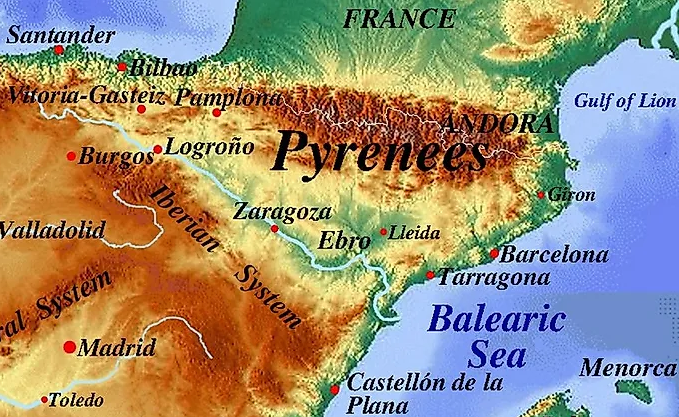 Although in the past the Pyrenees were portrayed as a cultural border, separating South-Western Europe - the Iberian Peninsula - from France, it turns out that they have not played the role of a barrier to gene flow. People with autosomal genetic signatures more typical of the Iberian Peninsula than of Central and Northern parts of France, live on both sides of the mountains. Not only in the north-western part of the Pyrenees near the Atlantic Ocean's coast (where the Basque people live on both sides of the border), but also as we follow the course of the mountains in eastern direction, we will keep encountering genetically similar populations on both sides of the Pyreenes, all the way until we reach the coast of the Mediterranean Sea. It can be seen in the PCA graph attached below: 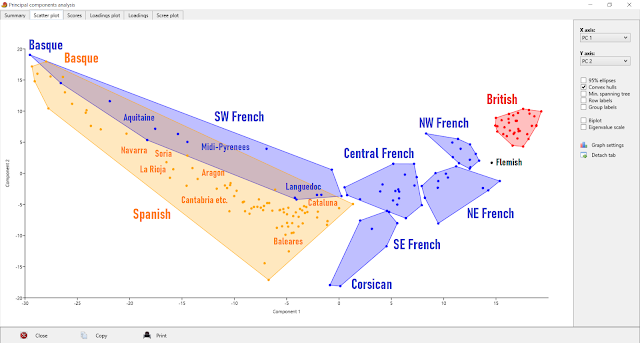 At least the following French departments form a genetic continuum with the Iberian Peninsula: 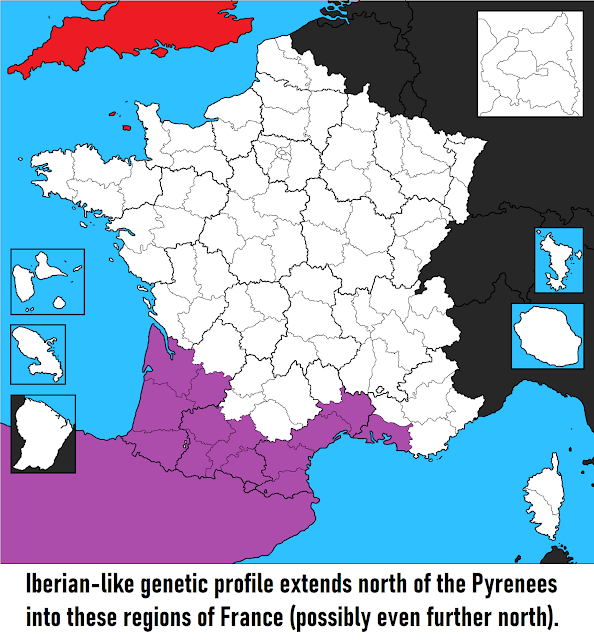 Often I've been reading on discussion boards, many posts, usually by Northwestern European users, claiming that it is virtually impossible to distinguish British and Irish genetics from Scandinavian. I question that - for a long time I've been saying that they are quite easy to distinguish. I challenge you to send me anonymous raw data files of either 100% British/Irish or 100% Scandinavian customers to my email: polandregionsdnaproject@gmail.com - within 48 hours from receiving, I will reply saying whether the file belongs to a British or a Scandinavian person. In case I lost the challenge, I'll admit that I've been wrong. Of course, do NOT cheat. And I do not guarantee 100% correct results for mixed people (for example 50% British + 50% Scandinavian) - only for unmixed British and unmixed Scandinavians.

Wallace Line and the genetics of Indonesia

Some 20,000 years ago during the Last Glacial Maximum when sea levels were much lower than today, the islands of Borneo, Sumba, Sumatra were connected with the Asian mainland forming a peninsula known as Sundaland; while Australia was connected with Papua New Guinea - forming the continent of Sahul.

Between those two landmasses, there was a bunch of islands known as Wallacea, named so after the British naturalist Alfred Russel Wallace, who in 1859 described these islands as transitional ecozones between those of the former Sundaland and those of the former Sahul. When it comes to animals, west of the Wallace Line - in former Sundaland - Wallace found only organisms related to Asian species, while to the east - he found that a mix of species of Asian and Australian (Sahulian) origins is present.

Interestingly, a similar division on both sides of the Wallace Line can be seen in modern Indonesia when it comes to human genetics and ancestry, in terms of Admixture percentages. Populations living to the west of the Wallace Line harbor basically no any Oceanian (Sahul-related, Papuan-like) admixture. They mainly harbor Malayan-like admixture (which - within Indonesia - peaks in Javanese ethnic groups) as well as other types of Mongoloid (such as East Asian or South-East Asian) admixtures. On the other hand, populations living to the east of the line harbor high levels of Oceanian admixture, similar to those found in Polynesian peoples, or even higher and similar to those found in Fijians or Melanesian peoples.

A map of Indonesia - showing only noise-level Oceanian west of the line: 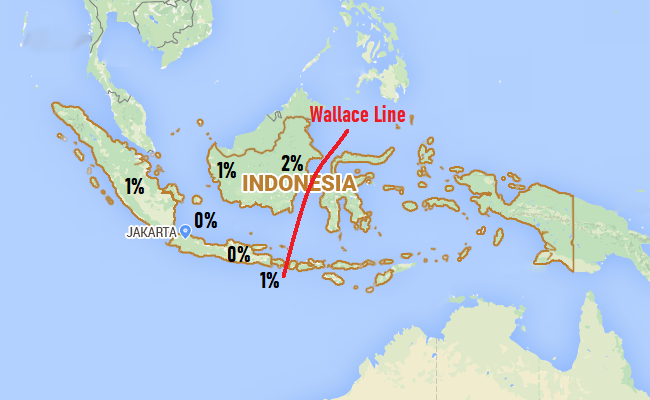 And regional Indonesian populations, sorted by % of Oceanian admixture: 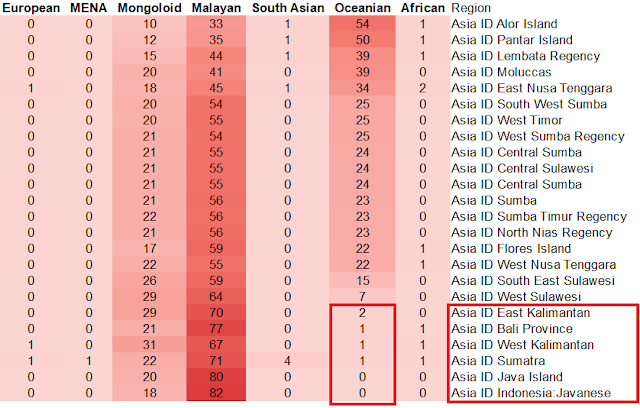 EDIT:       Thank you!  I've been flooded with requests for my ethnic estimates, I'm going to process all of your requests tha...